Before venturing into the nutritional value of this particular vegetable, its delicate & almost hypnotising beauty is worth a mention!  Fractal geometry might not be on everyone’s thoughts, but that’s exactly what the unique pattern seen here is.  There are odd-looking shapes all around us; these jagged repeating forms are called fractals.  Apparently, if you know what you’re looking for, you can find them wherever you look: clouds, mountains, and inside the human body. 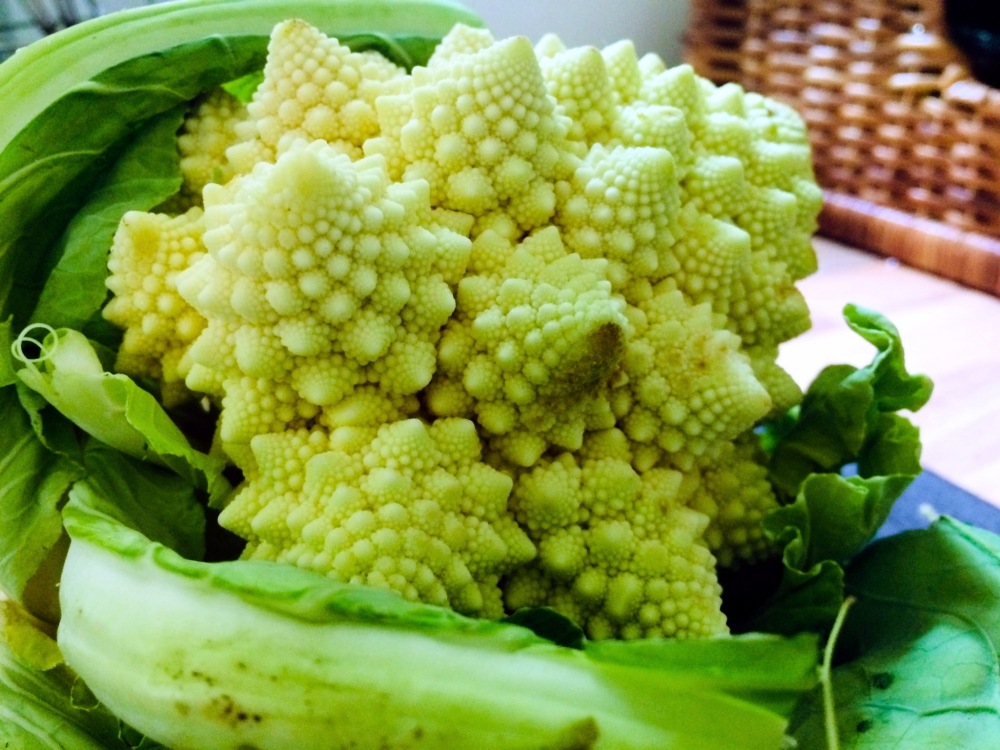 Among the most fascinating fractals found in nature, I ran into this one at the supermarket and couldn’t resist.  If only for the pretty picture, I had to include it in my repertoire!  But it was with much delight that I discovered the unique fractal quality of Romanesco broccoli as I searched through Pinterest of just what could be done with it.  Scientifically explained, fractals are special mathematical sets of numbers that display similarity through their full range of scale.  This basically means the shape looks the same no matter how big or small it is.  The laws that govern the creation of fractals seem to be found throughout the natural world: pineapples grow according to fractal laws and ice crystals form in fractal shapes…they are so beautiful!

The most astonishing thing about this particular fractal example in nature, is that in an actual extreme closeup of Romanesco broccoli, each of the smaller buds is made up of even smaller buds!  The number of spirals on the head is a Fibonacci number…I was just amazed by this whole fractal business.  In pinecone seeds, electric branching patterns, ice crystals, copper crystals, trees branching out, rivers branching out, in water drops & air bubbles, they’re really everywhere!  But enough with the science, let’s get to the culinary goodness we get from it…

Known by a number of names, which include Romanesco broccoli, Roman cauliflower, Broccoli Romanesco, Romanesque cauliflower, or simply Romanesco, this edible flower bud was first documented in Italy around the 16th century.  When compared to a traditional cauliflower, its texture as a vegetable is far more crunchy, and its flavor not as assertive.  Instead, it’s surprisingly more delicate and fluffier.  Superficially, it also resembles cauliflower, but shines with a beautiful chartreuse color which gives it extra rich nutritional values with lots of vitamin C, vitamin K, dietary fiber, & carotenoids.

So now that we understand what it’s all about, how would you go about cooking it, you ask?  Well, it’s been made pretty clear that it’s part of a family that includes broccoli, cauliflower, Brussel sprouts, & cabbage…so it’s only the most logic thing to think it can be cooked in any way you would cook all these other greens.  It can be served raw, lightly cooked, or cooked through.  A common form to prepare it is by slowly sautéing it with garlic & lemon zest, and punctuating it with red pepper flakes for added zing!  It’s also a wonderful partner to pasta, being more tender than cauliflower.  You can also try it in a gratin of sorts, dotting the blanched florets with crème fraîche mixed with Parmesan & bread crumbs!

Romanesco is in season during from late summer to early fall and can be often found at local farmers’ markets near you.  Just as when shopping for broccoli or cauliflower, look for firm, heavy heads free from discoloration or withered florets.  Vegetables, like clothing, tend to go in-and-out of fashion depending on who’s wearing what – or in this case, who’s growing what…and nowadays food authorities all over the Internet bring out the merits of this ‘new’ vegetable that ‘looks like miniature Christmas trees and tastes like broccoli’.  It has been called ‘stunning’, ‘cool’, ‘psychedelic’, and ‘alien’ and no matter what it’s been called, everyone seems to agree – we love it!  So go out and get yourself some Romanesco for your next healthy super meal!